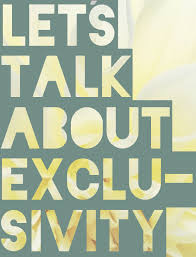 So, you think your role is ‘exclusive’.

Working exclusively with a client is of course what every recruiter wants. We are told early on in our careers that exclusivity is what it’s all about. Agreed. The problem is that in a lot of cases, there is no actual commitment from the client at all. They said ‘yes’ when you asked the question…..but why wouldn’t they? You have promised to dedicate yourself to their vacancy and won’t stop until you have filled their role…..but for that pleasure they have to pay you….nothing! In the meantime, if another agency happens to call  with the right candidate, or they find someone themselves, or decide they don’t actually need anyone after all …….nothing lost.  Sounds like a great deal to me !

This isn’t to say that every client enters into these things with the intent to mess you about. It’s just that quite often other solutions present themselves – and when those solutions meet their need then they would be stupid not to take it, regardless of what they might have told you.

The promise of exclusivity by itself means somewhere between nothing and very little.

I put a little teaser out on Linked on this subject a few days ago and it was pointed out, quite rightly, that it is different if your exclusivity is backed up by a contract with the client, where they are still up for a fee if they withdraw the role or it is filled by someone else. Similar with a retainer, the difference here is that the client has demonstrated a commitment to that exclusivity beyond just saying “Yes that sounds great” …translated as…“Yeh ok, why not, what have I got to loose’”

Many would argue that the only true form of exclusivity is being retained. I don’t want to kick off another retained v contingent argument here but, having done more and more retainers over the last couple of years, there is nothing like a client paying you something upfront to really show their commitment and give you the peace of mind you won;t end up wasting your time.

I always find it a little odd when an advert proudly claims that “we have been engaged on an exclusive basis” ……but then the identity of the client is shrouded in secrecy. If the role is genuinely exclusive, then I would have thought that in most cases, you should be able to, and want to be open about who your client is. So what if your competitors find out and try to cut your lunch? If it really is exclusive shouldn’t you  be confident that your client won’t entertain them – and if they do then you have covered yourself?

So before you go high-fiving your boss because you have come back with another ‘exclusive’ role, that you then proudly advertise as such, plug that fee into your pipeline and work your butt off to fill ..…only to then find out 2 weeks later the vacancy is no longer there and you have wasted a load of time …..question what ‘exclusivity’ actually means, not just to you but to your client.

Have you been let down by finding out that your exclusive client actually wasn’t? Or do you find that exclusivity can live outside of retainers and contracts? Drop your comments and stories below.

3 thoughts on “So, you think your role is ‘exclusive’.”