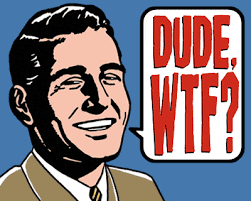 Recruitment can be a stressful job. There are lots of opportunities to get frustrated, disappointed and sometimes angry….even the most mild mannered of recruiters will have found themselves a little hot under the collar now and then.

I’ve read lots of blogs, and probably written a few about the best way to deal with these situations and the emotional fallout….everything from meditation to boxing to inebriation. Each to their own . But sometimes, the scenario is so stupid the only thing to do is just smile and say WTF…..

Last week proved to be an especially rich picking of WTF moments for me:

Ah recruitment…..yes it can drive you to the edge of madness sometimes…but other times it is just so brilliantly ridiculously, stupidly funny that you just have to say WTF and move on.

Please feel free to share whatever WTF moments you might have experienced recently in the comments below. Give your fellow recruiters a laugh….I’m sure there is some absolute gold out there.

One thought on “Recruitment – WTF !”