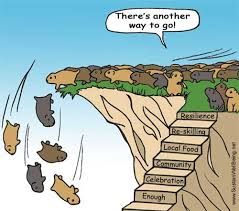 A bunch of professional sportsmen in this country just learnt a very harsh lesson. By blindly following their manager and doing everything he said without question, they have been banned from their sport for 12 months. All of them played for Essendon Football Club (that’s Aussie Rules to any of our non Australian friends), who decided that it would be a smart idea to inject their payers with ‘substances’ in the hope that it would give them a competitive advantage, all in the pursuit of glory. Doping in other words.

What became clear in the wash-up of this scandal was a sort of mob culture at Essendon where the players just went along with whatever they were told to do …… no one asked questions. And when the scandal broke, they continued to blindly follow their leaders even when many people outside of the club questioned the advice they were being given. Putting complete trust in their managers, and having a collective culture of ‘we are all in this together’ might have been honourable at the time, but it’s not done any of them much good now.

That ‘win at all costs’ culture reminds me of some recruitment agencies…not that there are managers running around injecting their team with performance enhancing substances. …but certainly an expectation to just follow and not question.

“Just leave that bit off the CV. The client won’t know.”

Early in my career, I was guilty of blindly following orders from my bosses – whether it was because I was keen to impress, scared to speak up or just didn’t know any better. And it didn’t make me a very good recruiter. I made money but also remember lots of unhappy clients and candidates who I had pissed off in someway. “That’s just part of being a recruiter”. I was told. And so I carried on.

I squirm when I now think of some of the shit I used to do. Of course, I know better now.

Essendon were happy to push the boundaries beyond what was acceptable and even legal to achieve their goals. Some recruitment agencies and their managers are the same and will do whatever it takes to hit targets…..or more accurately will make their recruiters do whatever it takes. And it is not just the agencies that we traditionally put in the dodgy bracket; it also happens at some very reputable and well-known brands too…. like Essendon were.

Whether you have just started in the industry or been kicking around for years, if you don’t like what you are being made to do, if you think it is bad practice, unprofessional, immoral, illegal then don’t put up with it. You probably won’t get banned from the industry, or fined, or punished in any way (because we are great at policing our own industry!) but you do no favours to your career and reputation by continuing down that path. Trust me…some brands are so toxic that having them on your CV for any significant period will hurt your future ambitions.

With the benefit of hindsight, the Essendon players might well be sitting around (because they are not training !) and thinking how naïve and stupid they were to just blindly follow their leader and not question anything. I bet they now wish they had done something about it. And at some point in the future, you might wish the same.  So don’t leave it too long to make that call.