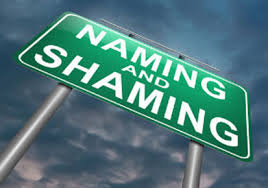 Is it just me or does there seem to be more and more calls for people to be named and shamed in the recruitment industry? You will have seen the posts on LinkedIn that threaten to expose someone for something ‘wrong’ they have done….and it is followed by a stream of support to ‘name and shame’ the individual. Whilst I am no fan of poor practices or dodgy operators, this seemingly growing vigilante movement to publicly flog anyone who has done wrong is ridiculous.

My main issue with this whole naming and shaming thing, and I have many, is that very few are willing to actually go public with their accusation. Whilst social media has given us all a ready-made soapbox and it is easy to climb on top and start shouting ….few have the gumption to actually follow through. They end up as nothing more than an ideal threat.

If it is that important to you…if you feel so strongly that the world needs to be informed of whatever it is that someone has done, then follow up on your threat. Otherwise it just comes across as a pretty meaningless dummy spat. A bit like a child in the playground who is going to get their dad to beat your dad up if you don’t give them back their football. It’s not a very good look in the playground, let alone in an industry that has aspirations to be seen more professionally.

Apart from being a bad look, it has the potential to be dangerous. I have never been on the receiving end of an angry candidate, or client wanting to publicly name and shame me, but I can imagine it wouldn’t be much fun. I doubt that the trial by social media that would follow would be very fair or do much for my brand or reputation. Start going down this kangaroo court path and who knows where it will lead. An ugly, tit-for-tat, wild west shoot out of ‘he said, she said’ at a guess.

No doubt we work in an industry where emotions run high. When things don’t go the way we want them to it is annoying, frustrating and can leave even the mildest mannered recruiter feeling a little angry and open to revenge. But whilst it might feel cathartic for a moment, the call to ‘name and shame’ really serves no useful purpose.

Maybe one day the recruitment industry will see fit to have some proper regulation and a pathway for grievances to be heard in a professional and formal way. That would be useful.